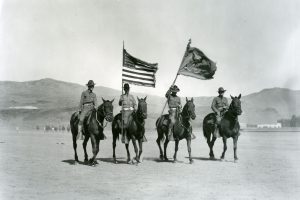 National Guard Bureau policy: units that are inactivated, broken up, or have their federal recognition withdrawn are to turn their colors and guidons in to the USPFO. The USPFO will in turn transfer these items to the state NG museum, if one exists in the state. If there is no state NG Museum, the USPFO will contact the USA Center Of Military History, and the flag will be mailed to the USA Center of Military History in Anniston, Alabama.

The purpose of the IMHS was to establish an Idaho military history museum for the general public, which could also be used to satisfy the needs, listed in the two above paragraphs. The museum the IMHS founded was the Idaho Military History Museum.

On July 27, 1994, the Center of Military History granted the museum Historical Holding status. This status meant that the USPFO no longer had to send inactivated units colors and guidons to Anniston, Alabama.

On May 25, 1999, thanks in part to the efforts of Mr. Phil Reberger and then Senator Kempthornes office, the IRS granted the IMHS permanent 501(c)(3) status.

In August of 1994, the Idaho Military Division (IMD) and the IMHS entered into a Memorandum of Understanding and developed a cooperative relationship.

In January 1999, this MOU was reaccomplished and expanded.