Where Fightin’ blue jackets were made! 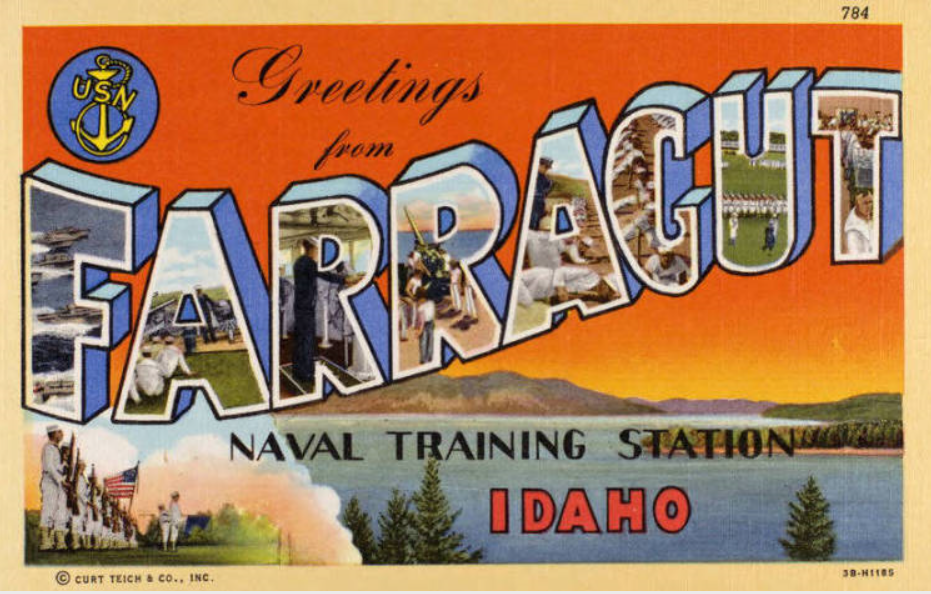 Nestled at the foot of the Coeur d’Alene Mountains in the Bitterroot Mountain Range and named for Admiral David Glasgow Farragut, a Civil War Naval Hero, Farragut, Idaho welcomed its first naval recruits on 17 September 1942.

From then until 10 March 1945 when the last class graduated, Farragut was the second-largest U.S. naval training station in the world. It was also one of, if not the largest, in Idaho. During the 30 months it was operational, Farragut trained 293,381 recruits and over 25,000 service school attendees. 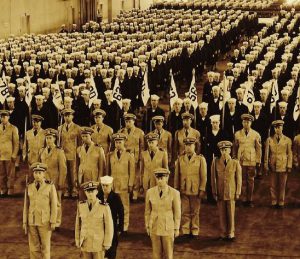 If you’d like to learn more about the former training station, we now have the following book in stock, “Images of America; Farragut Naval Training Station.” Makes a great gift for those who attended training there or if you are wondering what your loved one did while stationed there!

If you have photos of WWII Farragut you would like to share, please feel to email the Idaho Military Museum.

We are also looking for rosters accompanied with photos.

We are especially in need of the following rosters, as the ones we have are damaged and missing names:

The Idaho Military Historical Society answers numerous requests by patrons for various types of information related to Idaho’s military history every day. If you are not able to visit the library and archives to conduct your own research, our staff may be able to assist you.

A photocopier is available for use for $0.20 per page. Our staff can make them for you on a first come first basis for $0.50 per page.

Requests that can be answered in less than 30 minutes will be charged for staff-produced copies (letter or legal) and postage.

Requests that take an additional 60 minutes will be charged a $15.00 research fee, in addition to staff-produced copies and postage.

There is a $5.00 minimum copying charge for off-site queries.

Upon request, our staff can provide a list of local researchers experienced in either historical or genealogical research who can be hired to assist with longer research projects.

Any requests requiring international postage will be charges to the postage rated posted on the United States Postal Services webpage. https://ircalc.usps.gov/

*We reserve the right to restrict copying material which may be damaged by the photocopying process or carries donor-imposed restriction. The user is responsible for copyright compliance.

We have a Mystery… 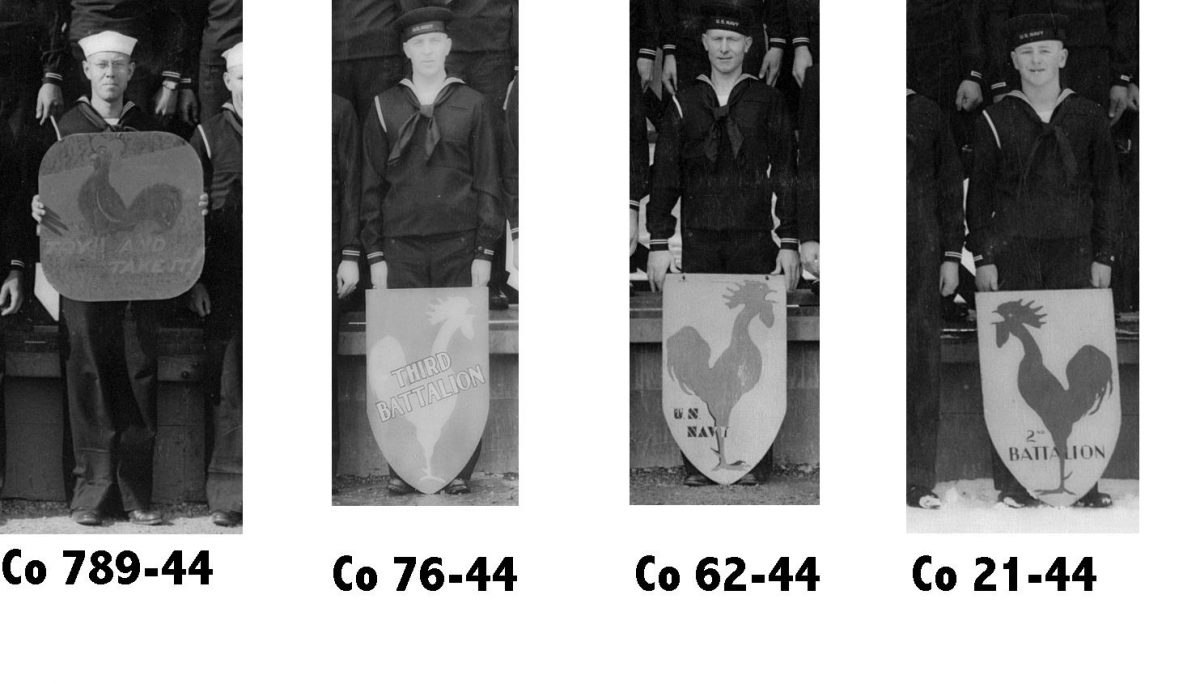 Farragut Veterans, we have bit of a mystery on our hands.

Several of the 1944 company photographs have a member of the company holding a shield or sign with a rooster on it. One of the shields reads, “Try and Take It!” so we are presuming that the rooster was something positive.

Here is composite photograph of four such rooster shields and the company photograph the images came from. If you can solve the mystery of the rooster, please contact us.

Update: The Rooster flag was the top award given to the company that won the weekly marching and drill competition. It would have rotated each week to that weeks winning company. The rooster flag got your company a ride to the front of the line at chow where you crow as you strut past everyone else.

Russell Groenevelt, top row, seventh man from the right, entered the Navy from Michigan on January 28, 1944. After boot camp he was assigned for further training to LCS (PAC) Oceanside, California. In February 1945 he was in the Solomon Islands to prepare for the invasion of Okinawa. He was a Carpenters Mate 2nd Class repairing Landing Craft at Boat Pool Baker on Okinawa. He was discharged in December of 1945. Special thanks to Russell’s son for sending us the photograph.

If you have a copy of the roster that accompanies this photo, we would very much appreciate receiving a copy of it.

Harold Roy Manley is in the photograph. After completing his “boot” training, he transferred to the hospital. Special thanks to Harold’s daughter for sending the photo, roster and searchable database of the rooster.

C.L. Winter in the second row, fifth from the right. After leaving Farragut, he went on to serve on the PT boats in the southwest Pacific and participated in the invasion of the Philippines. Special thanks to Charles Winter, C.L.’s son, for sending us the photo.

George E. Grow is fourth row up and 14th from the left. Following his graduation from Farragut, George went to San Diego for additional training before being shipped overseas. He was eventually sent to Yokohama after the end of the war and was discharged at Bremerton, Washington in February of 1944. Special thanks to George’s son for sending the photograph.

If you have a copy of the roster that accompanies this photo, we would be very interested in receiving a copy of it.

One of the recruits is Jack W. Birdsall. Jack is in the second row on the bottom. From the left he is the sixth person to the right. Special thanks to Jack’s daughter, for sending the photograph.

Howard C. Kinser, is in the bottom row, second person on the right. He arrived in Farragut from Oklahoma by way of California and served in the Navy from 16 September 1944 to 19 November 1945, rising to the rank of Machinist’s Mate (CB) Equipment Operator, Second Class. Special thanks to John Kinser, for sending the photograph and a searchable version of the rooster.

James C. Lucey is in the third row from the bottom, fifth person from the left. J.C. Lucey arrived in Farragut from Montana and after graduating served at the submarine base in Vallejo, California, eventually making his way to the Philippines where he supported the Pacific Submarine Fleet in the war against Japan. Special thanks to James Lucey, the son of J.C. Lucey, who provided the photograph and roster.

Emmett G. McGovern, is located on the front (bottom) row, fourth from the right. After Farragut, he served the Navy as a Sheet Metal Specialist working on Airplanes in Alameda, California. Special thanks to Phil McGovern of Chicago, Illinois, the son of Emmett G. McGovern.

Above is a class picture of Quartermaster School, Section 11, Service Schools, Farragut, Idaho. Graduation exercises were held on Dec. 8 1944. Loell R. Streit, is standing in the front row, third from the right. He served as a Petty Officer 2nd Class on the USS Karnes. His home town was Pocahontas, Iowa. Special thanks to his granddaughter for providing the photographs.

Francis D. Nash is on the 5th row, and 5th from the right. After Farragut, he served as a Radarman on board the USS Blue Ridge. Special thanks to Francis’ daughter for providing a photograph. 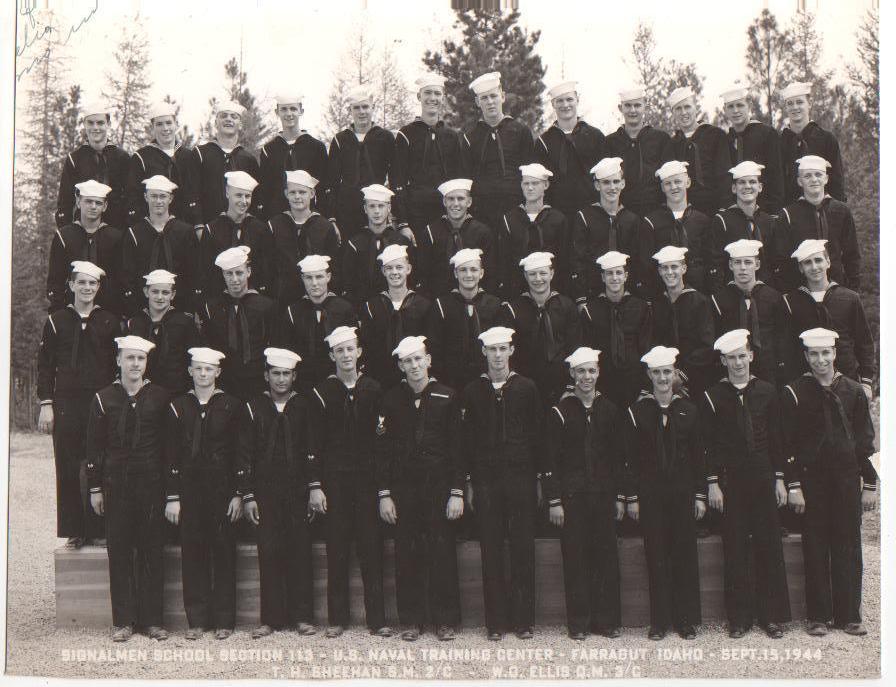 The Station was not only a training center for boots, it also had service schools for cooks and bakers, radiomen, quartermasters, signalmen, storekeepers, gunners mates, electrical personnel, shore patrol, instructors, dental technicians and classification interviewers. The service schools were initially located at Camp Peterson but later moved to Camp Gilmore. By April 15, 1945, the ten service schools had graduated a combined total of 25,943 students.

Pictured on the left, is Signal Men School 113 – Section 113 – US Naval Training Center – Farragut, Idaho – Sept. 15, 1944. Louis Magallanes, graduated with the class is standing in the bottom row, third from the left. Special thanks to Louis’ son for sharing the photograph.

If you have any information on when he graduated Farragut, we would very much appreciated receiving it. We do not have his exact graduation date, neither do we have his class photo.