A Brief History of the 1st Idaho Volunteer Infantry 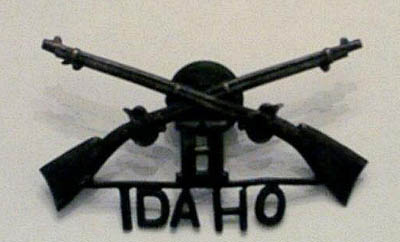 The 1st Idaho Volunteer Infantry was mustered into service at Boise, Idaho between May 7 and 18, 1898. At the time of mustering in, the unit consisted of thirty-two offices and 644 enlisted men, making it one of the smallest volunteer regiments formed during the war.

On June 27, 1898, the 1st Idaho left the United States for the Philippines aboard the transport Morgan City. It arrived in the Philippines on July 31. On August 13, the unit took part in the capture of the city of Manila. The fall of Manila was a staged battle, in that it had been pre-determined through negotiation that the city would surrender after a brief show of force to preserve Spanish honor. Some deaths did occur as the fighting forces on both sides were not privy to the negotiations, however, the 1st Idaho Volunteer Infantry suffered no casualties in the assault. Lt. Col. John Jones of the 1st Idaho reported:

“…At 7 o’clock that morning it [the regiment] was under arms, and promptly at 8 o’clock was in the position to which it was assigned. At noon it was advanced by order of General Anderson to the trenched, from which a regiment of General Greene’s brigade had been removed, and remained there until 4 p.m., when one battalion was ordered forward to this city [Quartel de Malate] and the other left to hold the trenches and check any advance movements by the insurgents. Not being under direct fire of the enemy I have no casualties to report.”

The fighting between Spain and the United States had ended by armistice on the very day that Manila fell – August 13 (August 12 in Cuba). However, word did not arrive in the Philippines in time to stop the assault, to marked advantage of the Americans. The Spanish American War ended on December 10, 1898 with the signing of the Treaty of Paris.

On February 4, 1899 fighting broke out between the American forces and the Filipino forces. This was the onset of the Philippine American War, the second war in which the First Idaho was involved and the war in which it would suffer its battle casualties. The unit saw action at Santa Anna on February 5, 1899, and at Colcocan, on February 10 and 11, 1899.

The 1st Idaho Volunteer Infantry remained in Philippines until July 30, 1899, when it departed for the United States. The unit arrived in the U.S. on August 29, 1899 and was mustered out on September 25, 1899 at San Francisco. At the time of mustering out, the unit had shrunk in size to consist of 32 officers and 444 enlisted men. 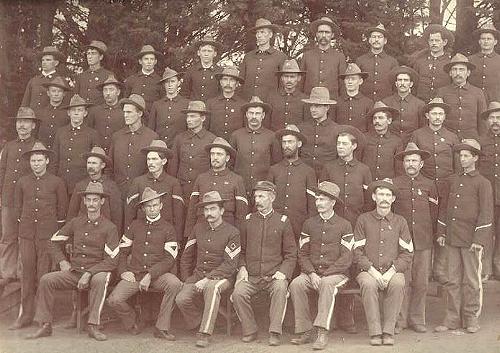 This is a photo of  company H of the 1st Idaho Volunteer Infantry. The officer seated in the front row, fourth man from the left is Captain, later Major, Frank Fenn. 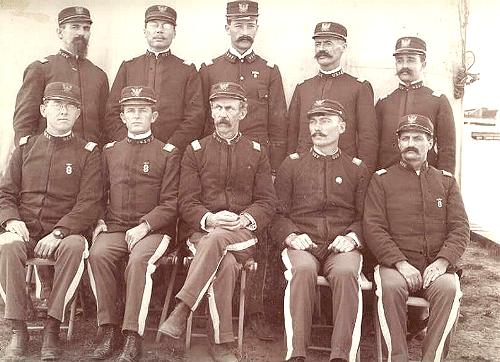 This is a photo of some of the officers of the 1st Idaho Volunteer Infantry. Seated in the center of the front row is Frank Fenn. Fenn was appointed Captain of Co. H, 1st Idaho Volunteer Infantry and served as acting Major from April 1899 to September 1899 when he was promoted to Major. Fenn had previously been with Perry at Whitebird, during the 1877 Nez Perce Indian Uprising. In this photo, a piece of canvas was used as a background. Behind the men appears to be a river. Fenn lived in Kooskia, Idaho after retiring from the Forest Service in 1920. He died in 1927 and was buried in Pine Grove Cemetery at Kooskia.